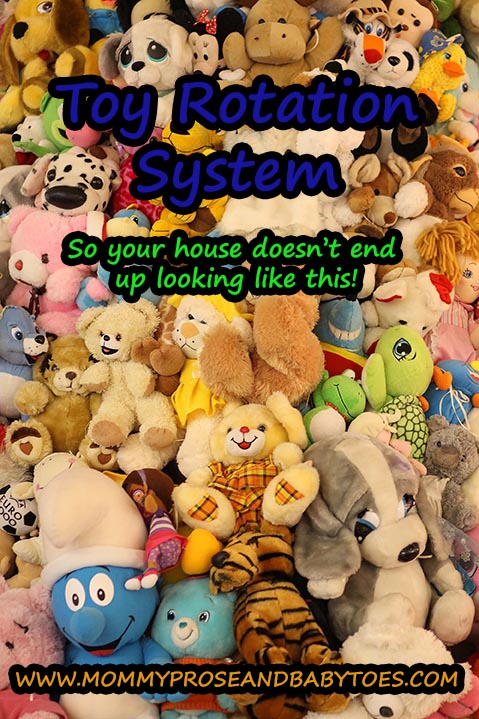 Little Man definitely has more toys than he needs! Part of the reason for this is because his birthday and Christmas were so close together, and he received a lot of presents from family on both occasions! If you’ve read my earlier posts, you will know that I think simple is definitely better! To help keep things a little simpler, I decided to use a toy rotation system. This not only helps to keep Little Man’s toys to a minimum, it also keeps him entertained for longer. All children get bored of playing with the same toys every day. I even get bored with them as I sit and play with my Little Man. Also, you can only hear those annoying sounds/songs for so long! Am I right?

Before I began splitting anything up, I decided how many rotations I wanted to have, and how long they would last. For this particular point in Little Man’s life (15 months), I chose four rotations, each lasting two days. Now, I’m sure you did the math, and know that this only adds up to six days. Little Man does get to see new things on the seventh day as well, however, they are typically larger items that are not kept in a box like my other rotations. Or there might be a day throughout the week that we were so busy, we didn’t have time to sit and play, so that rotation may be filled in on the seventh day.

In order to set up your rotations, you are going to need a container of some kind. I have seen many other people use plastic bins, which is a great option, however, I am cheap and didn’t feel like paying for those! Instead, I used copy paper boxes. These were the perfect size, and fit almost everything! Most workplaces just throw the boxes away, so ask if you could take them off their hands!

Once you have the containers for your toy rotation system, you will need to gather all of your child’s toys. This part is not fun! As you go through everything, decide what your child actually plays with. I definitely discovered a lot of toys that Little Man outgrew. I boxed these up, but if you’re not having any more children, I would look into selling them!

You should now be left with a nice pile of toys that can be divided into your containers. I tried to put a language, cognitive, and musical toy in each box, but obviously work with what you have! Below is an example of one of my boxes from my toy rotation system!

As I mentioned, these boxes are rotated every two days. Little Man also has books, and a few favorite toys available to him all day, every day!

I know this all takes awhile to set up, but once it’s done, your day will run much more smoothly! Hopefully, the interest in the “new” toys will keep some of those tantrums at bay! One can hope, right?!

Has your child outgrown most of their toys? Did they break most of them? Or do they just need something new? Check out some of Little Man’s favorites here: