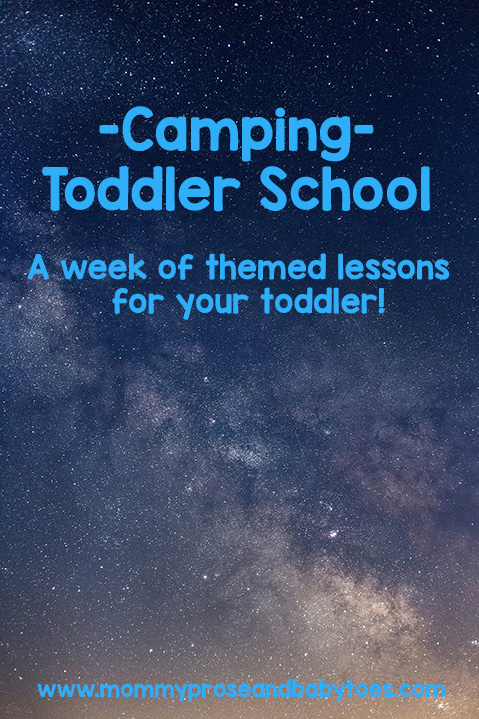 It’s camping week! So many fun ideas! Bonus points if you actually go camping! Unfortunately, it’s not exactly something we enjoy, so Little Man will just have to make do with the camping activities we try this week! 🙂 Don’t forget to click on the calendar below!

No surprise, we didn’t have any camping books! So we got them all from the library. 🙂

Just Me and My Dad by Mercer Mayer

The Berenstain Bears Go to Camp by Barbara deRubertis

Bug Sorting – I used two different sources for this activity. The first, was the bug jars from PreKinders. Then the second was the actual bugs from The Measured Mom. Feel free to use the actual activities on these sites; however, what I did instead was have Little Man match the colored bugs with the correct colored jar. Little Man only matched two jars at a time, as I didn’t want to overwhelm him. He only made it through two jars before he was bored and done, but that’s okay! These activities are meant to introduce your child to an array of themes and information, so please remember to let them lead!

Build a Bird’s Nest – I have seen this done with play-doh, so if you’re not one for messes, I would go that route! However, I decided to let Little Man get a little messy! We went outside and gathered twigs, leaves, acorns, stones, and other items found in nature. Then I mixed together some mud and let Little Man use the items to build his nest. I really thought he would love this, but lately, he is not into getting messy. Which is great for me, haha, but not so much for this activity! Therefore, I was the one who did most of the building, while Little Man added some things here and there.

Shooting Star Spinner – This idea is from Teach Beside Me, and is the bane of my existence!!! After stabbing my hand (I’m okay, just a little cut), trying to put holes in the bottle, I couldn’t for the life of me get the thing to spin! I understood how to do it; it just wouldn’t work! If you do this, and get it to work, I would love to hear about it in the comments! Little Man did really enjoy painting the stars though, so that was one good thing! 🙂

Flashlight Assembly and Play- This was right up Little Man’s alley! He is obsessed with batteries, and finding them inside every electronic we own! He doesn’t take them out, he just likes to find them! Anyone else’s child do this?! All you need for this is a flashlight. Take the flashlight apart and show your little one how to put it back together. Then let them try. After it’s together, go somewhere dark and turn it on to play!

Shadow Matching – This activity from ABCs to ACTs is a fun and easy activity! Perfect for our house, but unfortunately, we just didn’t have the time to do it! If you get the opportunity, all you need to do is print out the cards and see if your little one can match them together! If they can, try to play memory with them!

Fishing – We have this fun fishing game from Melissa and Doug. But I also made my own. All you need to do is cut out some fish and put paper clips on them. Then make a pole by tying one end of a string to a stick and the other end to a magnet. This horseshoe magnet would be perfect because it is big, and makes catching something much easier!

Cheerio Bird Feeder – This was a simple activity that only required Little Man to lace cheerios onto a pipe cleaner. However, he was much more interested in eating the cheerios than putting them on! He laced two or three of them and then was done! I finished them, and then we hung them on the tree.

Catch a Star – I found this idea on Pinterest, but it was only an image. I improvised using materials that I had. Surprisingly, I did have stars, and the tweezers. I didn’t have any type of black sensory filler, so I just used beans that I already had. Little Man can’t use the tweezers yet, he really wanted to, but he just doesn’t have the strength yet, so he just used his hands. He wasn’t that interested anyway, haha!

Camping yoga – I just typed this term into Pinterest and saw a bunch of different poses. I picked out the ones I knew Little Man could do, and demonstrated them for him. I suggest you do the same! 🙂 Below he is doing star and bear, haha! I could not get him to stand for the bear!

Build a fire – For this activity I gave Little Man blocks that were wood-colored, yellow, and red. Then I let him build with them. This was also a good time to sing The S’mores song!

Did You Ever Go A-Camping?

A Camping We Will Go!

Binoculars – Simply tape two toilet paper tubes together, and let your child decorate them! If you’re feeling really fancy, you could add a string! 🙂

Magnetic Camping Set – This adorable set come from Exploration America. I was really bummed that I did not have the time to do this with Little Man! It looks really cute, and I hope to have a chance to do it in the future!

S’mores snack – Oh boy, did my Little Man love this! We just made them in the microwave, but he devoured them!

That’s all we had time for this week! I hope you had fun trying out all of our camping activities! Come back next week for a new theme!