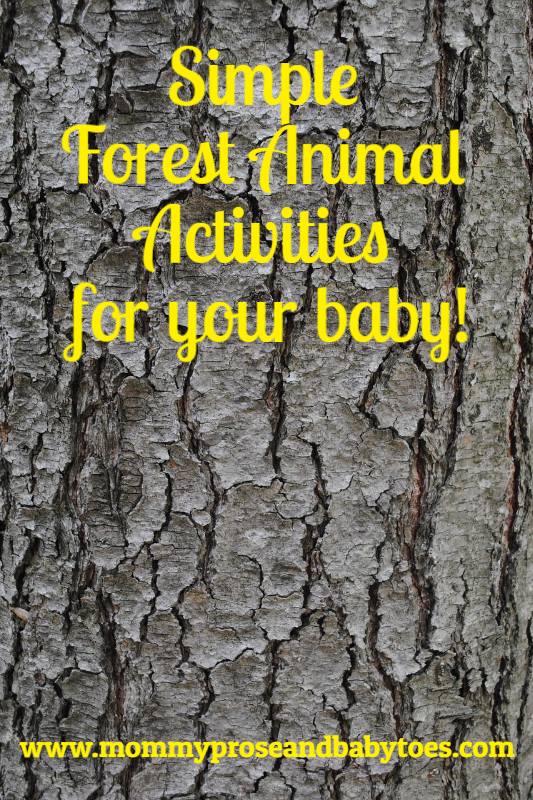 Well, I think I’ve finally run out of animals after this! Too bad though; they are so easy and fun! I should have thought to do forest animals sooner; little man’s nursery is moose themed!

Have you ever read the book, We’re Going on a Bear Hunt? It is the perfect book for this theme! No need to worry if you don’t own it, you can find the reading of it right here. Even though we do own the book, little man prefers to watch it instead. The book is just a little too long to keep his attention! Whether you read it or watch it, during the words “over” and “under,” use your little one’s hands to show the movements.

After the story, use whatever item(s) you choose to demonstrate over and under. I chose a basket and a few different forest animals. I hid the animals one at a time under the basket, and then flew it around over the basket. Of course little man doesn’t yet understand these concepts, but it is also great for teaching object permanence. 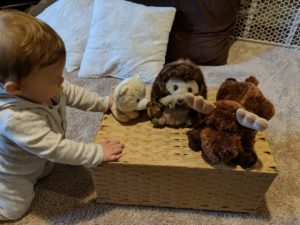 I tried to get a picture of little man looking under the basket, but he decided it was more fun to crawl into it, so… 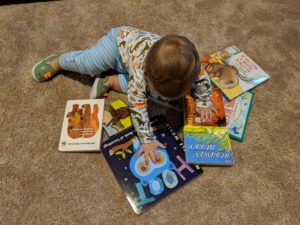 We’re Going on a Bear Hunt by Michael Rosen

An Adventure with Morris Mouse by Maurice Pledger

If You Give a Moose a Muffin by Laura Numeroff

Babies in the Forest by Ginger Swift

Who: Peek-a-flap Board Book by Jaye Garnett

School Time Snippets had the idea for these awesome sensory bags based on We’re Going on a Bear Hunt, and Teacher Types made sensory bottles. I chose to make the sensory bottles for little man because they keep everything contained, haha! 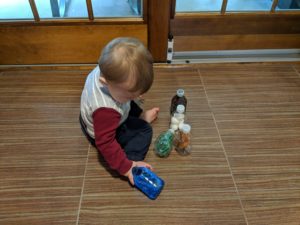 However, you don’t need to make the bags or the bottles. Instead you could just let your little one explore the outdoors. In the past, I have grabbed a bin, went outside, and filled it with grass, leaves, twigs, stones, and pinecones. When I do an activity like this, I am sure to keep little man’s pacifier in his mouth! If I didn’t, everything would be eaten! If your baby doesn’t use a pacifier, or if you just don’t feel comfortable, take them outside for a walk instead! We have some great walking trails around here! Hubby and I take little man as often as we can! He loves to take in all the sights around him!

This video is a variation of We’re Going on a Bear Hunt, and it is a lot of fun! While watching the video, act out the movements that are mentioned on screen. Little man loves acting everything out; although, I do change a couple of the movements to make it more fun for him! This is what we do:

Wheat field – I rub/clap his hands together

Bridge – I pat his hands, one at a time, on his legs (walking movement)

River – I sit facing him, grab his hands, and we row (I pull him toward me, and then let him go back the other way)

After that, I just move his hands really fast like he’s running (definitely his favorite part)! If your little one is older, or if you’re more skilled than I am, haha, you could do the movements again in reverse order. 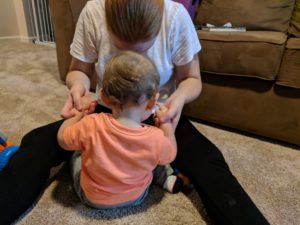 Hubby managed to capture little man and I as we acted out the story!

Depending on the age of your child, you could let them roll a pine cone in paint, and then on paper. I was actually going to let little man try it this way, but he currently likes to shake everything that is put in his hands, and I foresaw paint flying everywhere! Maybe I will try it outside when it’s not so cold and wet! Instead, I put a piece of paper in an old tupperware container, and covered a pine cone in paint. Then, I put the pine cone in the container, made sure the lid was on tight, and let little man shake it all around. 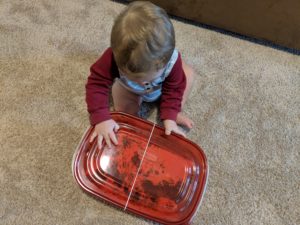 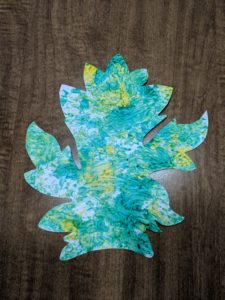 After little man finished his painting, I cut it into a leaf 🙂

There was a Little Turtle

I had a Little Turtle

The Bear Went Over the Mountain

She’ll be Coming Around the Mountain (I realize that this one and the next one aren’t really forest related, but I had a hard time thinking of forest related songs! It’s close enough!)

Home on the Range

Since I couldn’t think of many forest-related songs, I’ve listed a few places below where you can find more!