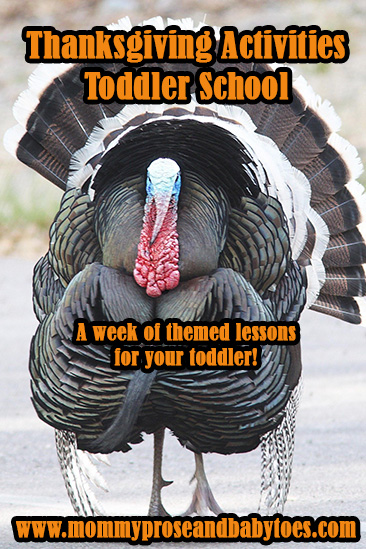 Happy Thanksgiving! Enjoy the extra time with your little one, and try some of these fun Thanksgiving activities! 🙂

Where is Baby’s Turkey? by Karen Katz

The Itsy Bitsy Pilgrim by Jeffrey Burton – Little Man loved this book from the library!

Mayflower Shapes – For this activity, I cut shapes out of foam, and had Little Man glue them onto popsicle sticks. Make sure to talk about the shapes as you glue them on. 🙂 Once the glue dried, I hot glued the popsicle sticks onto Little Man’s toy boats. If you don’t have boats, a fruit cup would be a great thing to use! After the hot glued hardened, I let Little Man play with the boats in the tub. He was really mad that he couldn’t get in with the boats, so I got them back out when it was bath time!

Build a Teepee – All you need for this activity are some popsicle sticks and play-doh. If you have bigger jars of play-doh, that would be helpful. I only had a small jar, so I placed the jar on the table and then set the play-doh on top, to make it tall enough. Then I rolled out some play-doh and put it around the jar so Little Man had something to stick the popsicle sticks into. Once everything is set up, let your little one set up the sticks to create a teepee. You may need to show them what to do. After Little Man understood, he completed the whole thing by himself!

Flying Turkey – I saw this idea on Vivify STEM Education, and liked it, but Little Man would not let me look at the directions, so we kind of did our own thing. I let him help fold the tail feathers in whatever direction he chose, and we added it onto the paper airplane that I made. Little Man loved throwing the “turkey” through the air! When he finally let me hold it, I told him that I thought the feathers were pretty heavy, so I was going to take them off. The “turkey” flew much better without the feathers.

Catch a Turkey – I found a few different STEM challenges on Pinterest about making a turkey trap, but knew they were way too advanced for Little Man. So instead, I got out Little Man’s blocks, and told him to make a tower (assistance was definitely required). Once it was made, I grabbed one of Little Man’s toy bins and set it up against the tower. Then I told Little Man to stick the turkey underneath. After that, you can knock down the tower (Little Man did it by accident, but it still worked). As soon as the tower falls, the turkey is trapped. 🙂

Shape Turkey – I found this idea on DIY Thought and knew I wanted Little Man to try it! I forgot to take a picture of him gluing the pieces on (minus the face, I did that). But here is the finished product! 🙂

Turkey Color Matching – This idea from I heart arts n crafts is adorable! Little Man still has trouble with the colors yellow and red, so this was great color practice! He did really well! I did have to hold the turkey for him, but he was able to squeeze the clothespins and put them on the turkey.

Don’t Topple the Teepee – The Inspired Tree House had this fun game! Little Man only wanted to grab all the pens! He didn’t care about the game part at all, haha! Any one else’s little one obsessed with pens?!

Ball and Triangle Game – Not sure if this was a real game played by the Native Americans, but Free Kids Crafts has the printable on their website. We unfortunately didn’t have time for this.

Turkey Hokey Pokey – You can easily find this on YouTube. Little Man loved the “turn yourself around” part!

Turkey Wobble – So I’ve heard of Koo Koo Kanga Roo, but never watched any of their videos. Let’s just say, I was not a fan. Little Man didn’t like it either, so thank goodness for that, haha!

Do the Turkey Trot

The Turkey is a Funny Bird

Dot Turkey Craft – For this activity, I let Little Man use his daubers all over a piece of paper. Then once it dried, I cut out turkey feathers. I added the feathers to a turkey cut-out, and ta da! 🙂

That’s all for this week! I hope your little one liked the Thanksgiving activities! Now it’s time to eat lots of turkey, and relax!