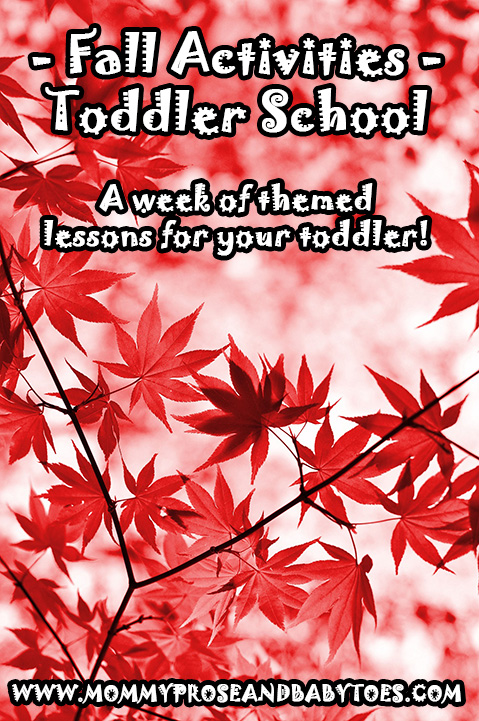 I thought I’d wait until November before completing some Fall activities, even though everyone already thinks it’s Christmas! To each his own, but I don’t start on Christmas until after Thanksgiving! Surprisingly, I actually had a hard time finding activities for Fall. I thought it would be pretty easy, but most were too advanced for my Little Man. So, I hope you like what I’ve compiled below! 🙂

There Was an Old Lady Who Swallowed Some Leaves by Lucille Colandro  – Little Man heard this story for the first time a few week’s ago and has been obsessed with it ever since! He likes the sneeze at the end, haha!

We’re Going on a Leaf Hunt by Steve Metzger

Baby Loves Fall by Karen Katz – Another of Little Man’s favorites! He has the whole thing memorized!

I Love Fall! by Alison Inches

Pumpkin Shape Puzzles – Teaching 2 and 3 Year Olds provided these pumpkin shape puzzles (at the bottom of her page). I only used the basic shapes because I didn’t want to overwhelm Little Man. He made one match, and I tried to show him how to put it together like a puzzle, and I got what you see in the second picture, haha! Needless to say, he was done after this.

Sink or Float – Lemon Lime Adventures came up with this really fun experiment! I have been teaching Little Man about sinking and floating during bath time with his toys, so this was a great way to reinforce the topic! Little Man loves water, and therefore loved this experiment!

Apple Bubbles – I got this idea from Preschool Powol Packets, but used an apple instead. However, this did not go so well! Little Man definitely knows how to blow; he blows bubbles all the time! But he chose to suck up the bubble mix instead! The picture below shows the exact second before all heck broke loose! He was so upset! There wasn’t much in the apple to begin with, and as far as I could tell it was all still there, so he must have only gotten a small taste, but that was enough! Rest assured he is fine, but it was a rough 15 minutes!

Color Mixing – I saw this on Play, Teach, Repeat. It was a cute and easy activity! Perfect for our busy days!

Magic Pumpkin – We didn’t to try this experiment from Playdough to Plato because I didn’t have any candy on hand, but it looks like fun, and I know Little Man would have liked it! Especially the candy part!

Pumpkin Rubber Bands – So, I knew that this activity from The Imagination Tree would probably be too hard for Little Man, but I thought instead of putting them on, he could take them off. Either way, he had minimal interest, haha!

Pumpkin Balance – Happy Toddler Play Time had this cute activity. We had tried something similar during Apple week, and Little Man struggled with it, so I thought now was a good time to try again.

Pumpkin Drop – I’ve done this before with Little Man. He still doesn’t quite get the whole dropping concept, but he loves to put things into containers (and dump them out of course)! This activity was supposed to be like a clothespin drop, but using mini erasers and a pumpkin instead.

Raking Leaves – I didn’t have a rake for Little Man, so we used a broom instead. Little Man didn’t do too much sweeping, but he loved pushing the leaves around! Definitely his favorite activity this week! If you have a chance to go outside and jump in piles of actual leaves, be sure you do! Little Man loves jumping in the leaves!

Leaf Fine Motor Practice Mat – In My World has a cute, fine motor, leaf center that I wish we would have gotten to! Although, I’m not sure I have that many buttons!

Fall Leaf Sun Catchers – I didn’t get to this adorable activity from Cute & Peculiar. But it looks easy and fun!

That’s all the Fall activities I could find! I hope you enjoyed them! Check back every week for a new theme! 🙂