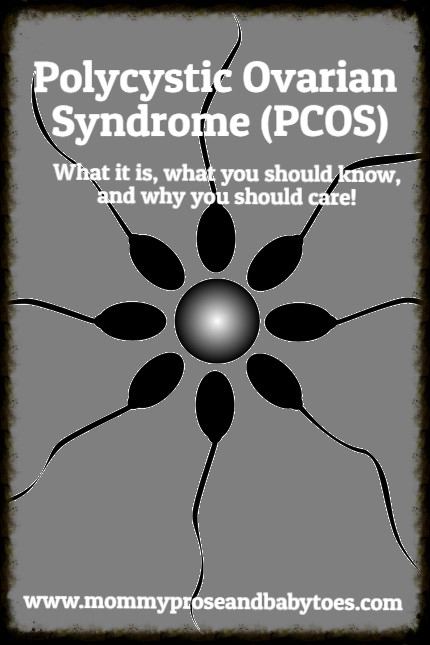 Being a woman is hard, and when you have a condition like Polycystic Ovarian Syndrome (or PCOS), life can be even harder. Many women don’t even know they have PCOS because it’s not something that your gynecologist typically discusses during your annual appointment. My PCOS was actually discovered by a gastroenterologist. I was experiencing stomach pain and the gastroenterologist decided to do a pelvic scan. After they found the cysts, I scheduled an appointment with my gynecologist, and they took over. The gynecologist confirmed that I had cysts on my ovaries and that one of my fallopian tubes looked to be blocked.

My husband and I had just started trying to conceive a child, so this news was devastating. Thankfully, once my gynecologist was aware of the syndrome, she was able to help me with my infertility. The first thing was to determine if my tubes were actually blocked. To check this, I underwent a procedure called a hysterosalpingogram, or HSG, and thankfully received positive results (both tubes were open). However, my PCOS was still preventing me from ovulating. Often the first attempt to fix ovulation issues is to try medication. Many woman have success with medication and conceive without any further issues. I was one of these lucky women. Sadly, some women are not so lucky and require further treatment, including hormone injections and in vitro fertilization.

PCOS is the leading cause of infertility in women, and affects over 10 million women worldwide. For something to be so prevalent, you would think more women would know about it. Ten million is likely not even a true representation as women are often diagnosed with something else, or are not diagnosed at all. I dealt with pelvic pain issues for years, but I was given the diagnosis of IBS. Therefore, it is my hope that by writing this, I can teach at least one woman about such a prevalent disorder, and I only ask one thing in return: pass your knowledge along.

Maybe if more women mention this to their gynecologist, more of them will start advocating for a cure, or at the very least make women aware of the condition during annual exams. It is completely understandable that PCOS is not something that is routinely checked for; after all, your body shouldn’t be exposed to ultrasounds unnecessarily. However, women should be informed of it. I see commercials about endometriosis (another disorder that affects you ovaries and fallopian tubes) all the time, where are the commercials for PCOS?! Until I was diagnosed I had never even heard of polycystic ovarian syndrome, and the first response I usually receive when speaking to someone else is, “What is that?” Women deserve to be informed about our bodies; we deserve some answers!

So, now that I’ve told you my story, you’re hopefully interested in a little more information about PCOS. When I was given the diagnosis, my mind was a blur, so if the doctor explained anything, it went in one ear and out the other. Therefore, most of the information that I have found to be useful on PCOS, comes from pcosaa.org, pcos.com, and the three articles listed at the end of this post.

To start off, PCOS is an endocrine (or hormonal) disorder, and to be diagnosed with it, a women needs to meet two out of three criteria: 1) there has to be cysts on one or both ovaries, 2) there is an absence of ovulation, and 3) high levels of androgens. I have the first two, but was unaware because birth control had been regulating my cycle for years.

Now, the above criteria will get you diagnosed with the disorder, however, there are unfortunately many other symptoms that are associated with PCOS. I thankfully only experience a couple of symptoms in addition to cysts and infertility (ovulatory dysfunction). However, most women unfortunately experience many symptoms, including: pelvic pain, anxiety, weight gain, bloating, unwanted hair growth, thinning of hair, acne, headaches, depression, mood swings, fatigue, sleep problems, and an increased risk of diabetes, heart disease, stroke, and endometrial cancer. There are also likely several others that I am forgetting at the moment.

Those are just the symptoms that women with PCOS deal with on a daily basis! When a woman becomes pregnant, she could also experience: increased risk of miscarriage, gestational diabetes, preeclampsia, preterm birth, or c-section delivery, as well as, an increased chance that she will have a low milk supply if choosing to breastfeed.

Unfortunately, there is no cure for PCOS, although some may argue that laparoscopic ovarian drilling or ovarian wedge resection provide a cure (I have had a couple of people tell me this). However, both of these procedures only provide a “cure” for ovulation; doing nothing for the multiple other symptoms associated with PCOS. I also use the word “cure” lightly because laparoscopic ovarian drilling and ovarian wedge resection are not always successful, and the risks associated with each are so great that doctors to rarely perform them.

When it comes to diet, try to add high fiber carbs (whole grains, fruits, and vegetables), lean proteins (fish, beans, eggs, chicken, and meat), and anti-inflammatory foods (leafy vegetables, berries, and tomatoes). You should also try to avoid refined carbs (white bread, pasta, and sweets), sugary foods and drinks (cookies and soda), and inflammatory foods (red meat and processed meat). I’ve only listed some of the foods for each of these categories, so if you plan to make a change to your diet, please speak with your doctor to develop a more comprehensive plan. Exercise should also be incorporated into this plan. However, you don’t want to do too much too quick, so be sure to discuss this as well!

If you are interested in learning more about PCOS, please go to pcosaa.org, pcos.com, or the pages listed below. Also, if you do nothing else, please tell at least one other woman about PCOS. Every woman deserves to know what is happening in her own body, so let’s make sure they are!