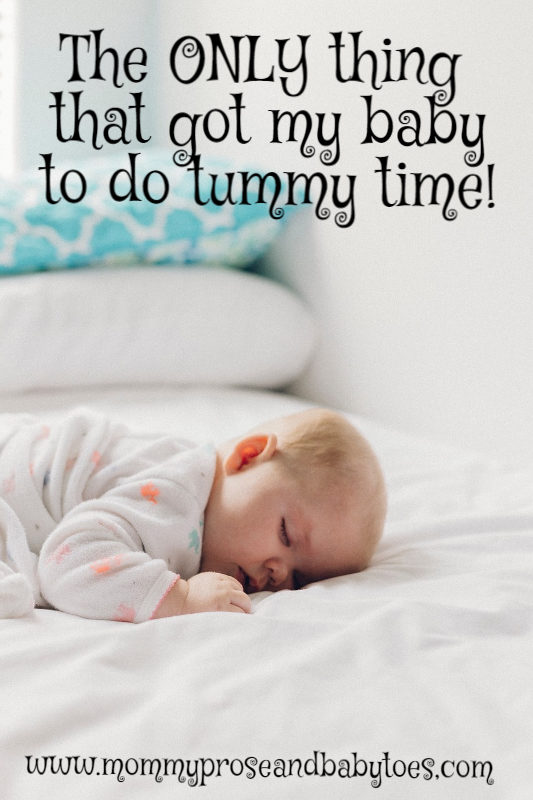 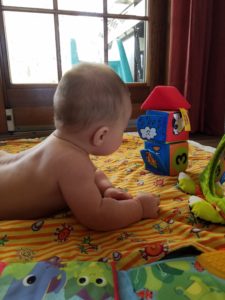 For my little man, tummy time was the worst. At six weeks he was diagnosed with acid reflux.  To help control it, we were told to put oatmeal in his bottle. While this definitely helped with the screaming and crying, it did not stop the spit up. The spit up was particularly bad when he was placed on his stomach. He would spit up almost immediately after he was placed on his tummy. Of course, he would then cry really hard. Obviously, I could not leave him like that, so I would pick him up. I tried a few times throughout the day, but the same thing would happen.

My husband and I attempted to help combat this by doing all sorts of things – a bag of rice on his back; a warmed, rice-filled glove on his back; a rolled towel under him; a boppy pillow; things to look at; things to touch; being on eye level with him – nothing worked. Until…. I got him naked.

It was finally warming up outside, and I noticed that my little man loved to be naked. I often let him play in his diaper before bath, but he loves being completely naked even more. This love of being naked, combined with me reading an article that said you should try to let your baby go naked at least once a day, led me to try naked tummy time. I was a little worried about pee going everywhere, but I put him on an easy to clean surface with two blankets underneath. He loved it! He still spit up, but it didn’t seem to bother him as much. The first time I tried it, he stayed on his belly for five minutes before fussing. The next time was eight! This was a little boy who couldn’t make it one minute without screaming! That’s all it took!

Even if your baby loves tummy time, I suggest trying this out! Just lay out blankets in an area that is warm and easy to clean. Then put a mirror and one or two toys in front of your baby, and get down on their level. I bet they will love it just as much as my little man!

Also, don’t stress about the pee! These things happen! I do wait until we are close to feeding time before trying this, because hopefully, he doesn’t have to go at that point, and because I try to keep him from spitting up.

Before I tried this, I starting to worry about little man learning to roll; because how was he ever going to learn if he won’t lay on his tummy? Tummy time is so important for gaining the muscle strength that will not only help with rolling, but with sitting, crawling, and walking as well! I am so happy this worked! So, for the moms that have tried everything else – try this! I hope it helps!